Kaimur located at 25°02'13" N on latitude and 83°33'33" E longitude is spread over an area of about an area of 3363 km². Geographically it is surrounded by Buxar and Gazipur (U.P.) in north, Garhwa (Jharkhand) in south, Rohtas in east and Chandauli and Mirzapur (U.P.) in west. A thick lush green cover of forest covers the major area of Kaimur. The region is further dotted with numerous rivers and waterfalls. 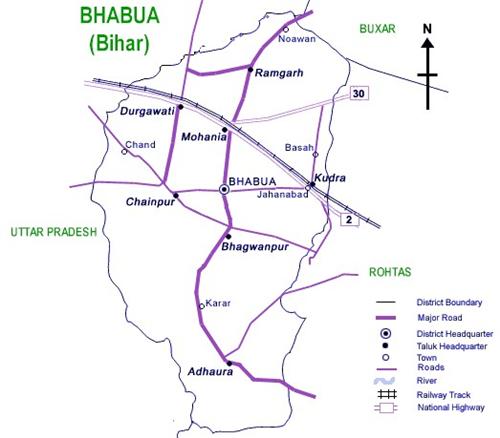 The climate of Kaimur is typically an extreme climate. The summers are very hot and winters are very cold. The temperature in the month of January falls down to single digit. The month of May is the hottest month with temperature reaching around 45°C. The monsoons bangs in Kaimur in mid-June and lasts till mid-September.

Kaimur has a very undulating topography and can largely be divided into two area viz:
(i) Hilly Area
(ii) Plain Area.
The hilly area that covers the eastern Kaimur comprises of Kaimur plateau. The plain area that lies on the western side is bestowed with two rivers Durgawati and Karmanasha. The Kudra river lies on it eastern side. Sands found on the banks of river Durgawati and the Kudra are extensively used as building material. There is a possibility of finding limestone, sulpher and pyretic iron ores on the Kaimur hilly area.

Comments / Discussion Board - Geography of Kaimur